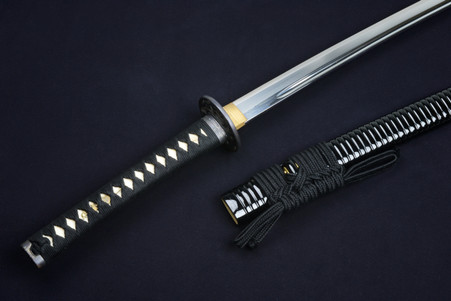 The 'All Japan' YAGYU KOSHIRAE pays homage to the swords favoured by the renowned Yagyu clan of 16th and 17th Century Japan.

The Yagyu clan were teachers of swordsmanship to the Tokugawa Shogunate, and their style of fighting was known as Yagyu Shinkage Ryu. Originally founded by Kamiizumi Ise-no-kami Fujiwara-no Nobutsuna, Shinkage Ryu is said to have been the first school that allowed realistinc sparring, thanks to Kamiizumi's invention of the 'Fukuro Shinai' - the predecessor to the Shinai used in modern Kendo. Shinkage Ryu was passed on to Kamiizumi's student, Yagyu Sekishusai Taira-no-Munetoshi - the first of the Yagyu Clan's famous swordsmen - who founded the Yagyu Shinkage Ryu.

Matching the design and style of the swords actually used by the Yagyu clan, the YAGYU KOSHIRAE features the distinctive squared/flat Kashira, a strict rule of the Yagyu style, and a matching design for the Fuchi. The 'Botan' (tree peony) Menuki, are placed in the reverse 'Yagyu Gyaku-oki' (also called 'Sakasa Menuki)' style, again favoured by the Yagyu clan, as by the teachings of the Yagyu Shinkage Ryu, this makes it easier to grip the sword correctly. At the height of their power, the Yagyu clan would have often seen Botan flowers decorating temples, and court gardens, as well as often being depicted in contemporary art and poetry, owing to them being believed to represent a righteous and noble spirit.

The Tsuba is also the well known Yagyu Namiguruma design, depicting waves cascading through the spokes of a cart wheel. This design was popular with the Yagyu clan, as it references the techniques of the Yagyu Shinkage Ryu - to be fluid, and water like, quickly filling any gaps in the enemy's defence, as well as the 'Wheel Kamae'. But deeper than that, it also represents the endless cycle of the battle against oneself.

The Saya is a unique 'Sendan Kizami' design, which matches the swords owned by Yagyu Hyogo Taira Toshikane (also known as Yagyu Renya), who was the 5th headmaster of the Yagyu Shinkage Ryu.

Perfect for all levels of Iaidoka, this beautiful sword is also perfect for those looking for a distinctive, yet historical display piece.

Important : All Japan Budogu's Iaito and Japanese swords are designed for non-contact, solo practice only. Please do not use them for cutting or paired exercises. Doing so may both damage the blade and/or cause serious injury. THIS SWORD CANNOT BE SHARPENED. All Japan Budogu accepts NO RESPONSIBILITY for any damage and/or injuries caused through misuse of this product.

Please be advised that ownership of Japanese swords is restricted by the governments of some countries and/or regions. Please be sure that your purchase complies with the laws of the delivery destination, and that you have relevant permission to own and/or import an Iaito BEFORE placing your order. Any swords returned to us due to failure to comply with local regulations, laws or for otherwise similar reasons will be refunded MINUS all imposed shipping costs, plus a restocking fee of 60% of the Iaito's total purchase price.

Approximate Weights of All Japan Budogu Swords :
Please note that the weights shown above approximate, and for guidance purposes only. The actual weight depends on the exact fittings.

All prices are in CAD © 2020 All Japan Budogu. Sitemap | Switch to Mobile Version