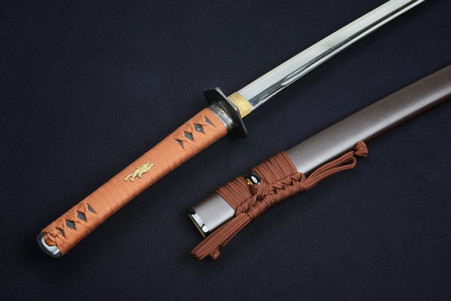 The 'All Japan' TOPPEI KOSHIRAE is based on the style of sword that became popular during the late Tokugawa Shogunate - known as the Bakumatsu.

Soldiers began to receive training from French military instructors, who taught close order drill, artillery and the military science of Europe. At this time, the military uniform became westernized, and due to the lack of an Obi, swords were carried in a leather frog, or loop attached to the gun belt. For this reason, the Saya was fitted with a large, pointed O-jiri, which allowed them to be easily worn in this way. As this was the final development of the Japanese sword, before its widespread use disappeared under the Meiji restoration, the Toppei Koshirae represents the final transition from Katana to Gun-Tou (military sword). For this reason, the Tsuka is wrapped using the 'Ikkan Maki' style, which was popular for military use since the Tensho era.

The Toppei Koshirae gets its name from the O-jiri's resemblance to a conical type helmet, called Toppai Kabuto, but as it was often worn with western style clothing, it was often also reffered to as Zubon (trousers) Koshirae.

Perfect for all levels of Iaidoka, this beautiful sword is also perfect for those looking for a distinctive, yet historical display piece.

Important : All Japan Budogu's Iaito and Japanese swords are designed for non-contact, solo practice only. Please do not use them for cutting or paired exercises. Doing so may both damage the blade and/or cause serious injury. THIS SWORD CANNOT BE SHARPENED. All Japan Budogu accepts NO RESPONSIBILITY for any damage and/or injuries caused through misuse of this product.

Please be advised that ownership of Japanese swords is restricted by the governments of some countries and/or regions. Please be sure that your purchase complies with the laws of the delivery destination, and that you have relevant permission to own and/or import an Iaito BEFORE placing your order. Any swords returned to us due to failure to comply with local regulations, laws or for otherwise similar reasons will be refunded MINUS all imposed shipping costs, plus a restocking fee of 60% of the Iaito's total purchase price.
Approximate Weights of All Japan Budogu Swords :
Please note that the weights shown above approximate, and for guidance purposes only. The actual weight depends on the exact fittings.