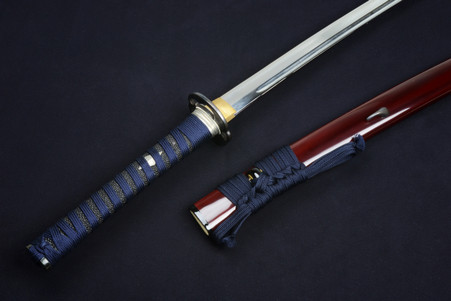 The Tsuka is in the Ryugo Design for a better grip. Tsuka wrapping comes in Navy.

Based on the sword of Akechi Mitsuhide (, March 10, 1528 – July 17, 1582), first called Jubei from his clan and later Koreto Hyuga no Kami (from his title, was a general who lived during the Sengoku period of Feudal Japan.

Mitsuhide was a general under daimyo Oda Nobunaga, although he became famous for his rebellion against Nobunaga in 1582, which led to Nobunaga's death at Honno-ji.

Makes for a beautiful display piece, as well as a dignified practice sword for Iaido.

Important : Iaito from All Japan Budogu are designed for non-contact, solo practice only. Please do not use them for cutting or paired exercises. Doing so may both damage the blade and/or cause serious injury. THIS SWORD CANNOT BE SHARPENED. Samurai Super Store accepts NO RESPONSIBILITY for any damage and/or injuries caused through misuse of this product.

Please be advised that ownership of Japanese swords is restricted by the governments of some countries and/or regions. Please be sure that your purchase complies with the laws of the delivery destination, and that you have relevant permission to own and/or import an Iaito BEFORE placing your order. Any swords returned to us due to failure to comply with local regulations, laws or for otherwise similar reasons will be refunded MINUS all imposed shipping costs, plus a restocking fee of 60% of the Iaito's total purchase price.
Approximate Weights of our Swords :

Please note that the weights shown above approximate, and for guidance purposes only. The actual weight depends on the exact fittings.